On Sept. 19th, the Crumbre Vieja volcano on the island of La Palma in Spain’s Canary Islands erupted, with devastating consequences. The eruption forced the evacuation of 7,000 people (close to 10% of the island’s population), destroyed almost 2,000 buildings, spread over 1,800 acres and released 250,000 tons of sulfur dioxide.

Rapid response during a natural disaster

“When the UME needed devices quickly to protect the personnel analysing gases coming from the lava, we knew we had the products to help,” said Marc Delgado, Head of International Sales, Sensotran.

“The high level of automation of the G7s, combined with their location tracking, ability to detect falls and ability to transmit voice and push-to-talk (PTT) calls (which we are providing free of charge) make them ideal to support the response at La Palma.” 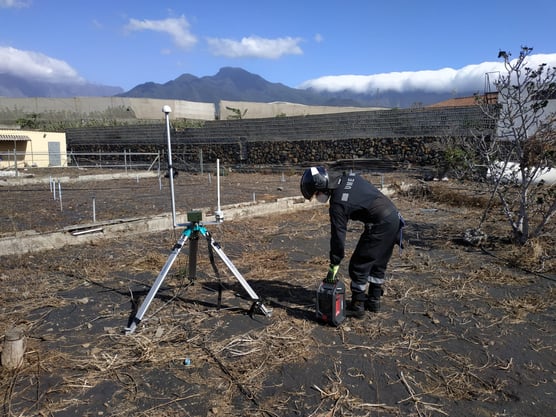 The military also set up a G7 EXO portable area monitor in the surrounding area to enhance the protection of communities. Configurable to detect up to five gases, including VOCs with a PID sensor, G7 EXO provided continuous monitoring of the area, notifying live monitoring personnel of any gas hazard levels that arose due to volcanic activity, changing wind patterns and more.

The data can be easily leveraged for greater in-depth analysis and reporting.

The Canary Islands Volcanology Institute reported in September that the aftermath of the eruption could last for many weeks or months, meaning residents and rescue workers could be at risk of continued earthquakes, lava flows, toxic gases, volcanic ash and acid rain well past the initial disaster.

Blackline Safety donated €2,000 to World Central Kitchen (WCK), a US-based non-profit founded by Spanish-born chef José Andrés, to further support the response during this extended period. WCK served meals to first responders and displaced populations at La Palma when they needed it most. WCK uses the power of food to nourish communities and strengthen economies through times of crisis and beyond. Learn more about WCK’s mission here.

On January 17, 2023 at approximately 4:30 p.m. local time, a large fire broke out at a lithium battery storage warehouse in the Grand-Couronne...

Shutdowns and Turnarounds: Four Key Considerations For Your Organization

Shutdowns and turnarounds are a necessity for oil and gas refineries and petrochemical plants to conduct maintenance, repairs, refittings and...
Back to all blog posts
Subscribe to Blog