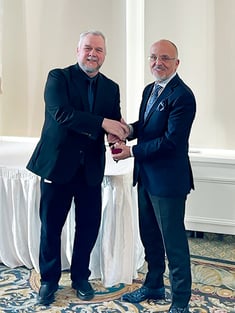 The essence of leadership is to have a vision. Blackline’s CEO and Chair, Cody Slater, has dedicated his entire career on ensuring this statement becomes a reality:

Ensure every worker has the confidence to get the job done and get home safe.

He’s built two companies and supported various causes in alignment with that vision as a result.

For his leadership through purpose and inspiring others to do the same, Cody Slater received the Queen Elizabeth II’s Platinum Jubilee Medal on December 14th, 2022, in recognition of his significant contributions to society.

“It is a tremendous honour to be recognized with the Queen Elizabeth II’s Platinum Jubilee Medal,” said Mr. Slater. “I'm incredibly proud of the work that all Blackline Safety team members have put into helping to bring our customers' employees home safe each and every day." 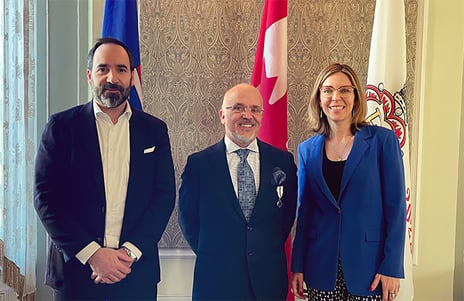 Born in Edmonton and raised in Jasper, Alberta, Cody Slater is a successful entrepreneur and community-oriented philanthropist. Today, Cody is the CEO of Blackline Safety, a Calgary-based technology company that manufactures safety wearables and software that protect over 110,000 people in 70 countries around the world every day. His primary motivation throughout his career has been to protect people's lives while they are on the job so they can get home safe to their families.

“Cody Slater has dedicated his career to thinking about the greater society and creating careers with purpose for Albertans." stated Raja Mita, Executive Director of Health Innovation at Alberta Innovates, the organization that nominated Mr. Slater. “Before he took on the role as CEO at Blackline Safety, Cody successfully built BW Technologies, a company he also founded and grew here in Alberta to save lives.”

When Cody Slater joined Blackline Safety as CEO in 2014, it had sales of around $3 million. By the end of fiscal 2021 Blackline Safety had graduated from the TSX Venture to the TSX with top line revenue of $54.3 million and employing more than 500 people around the world.

Previously, Cody founded BW Technologies in 1986, a global manufacturer of industrial and commercial gas detection devices with a product line of more than 30 unique health & safety instruments. BW was acquired by Honeywell.

Cody Slater has established two family foundations to support non-profit organizations in Canada—one focused on giving a helping hand and one focused on supporting the arts with key support going to:

Additional achievements of Cody's include leadership of one of Canada's fastest growing technology companies which has been well recognized, garnering numerous awards including Alberta’s Most Influential Top 50 People, Ernst and Young’s Entrepreneur of the Year, the Certificate of Merit for Business Excellence by Industry, Science, and Technology Canada and the 2022 Business in Calgary Leaders Award.