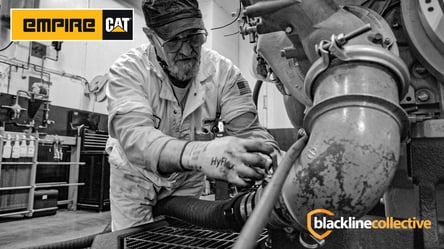 As part of its involvement in Blackline Collective, Empire Southwest shared insight through a video on how strong leadership is the key element for building a safety program and culture, especially in industrial environments where profit and productivity are typically prioritized over workplace safety. Through several safety initiatives driven by its leadership team, Empire Southwest was able to garner strong buy-in and protocol adoption across the organization that resulted in a 94% reduction in its Recordable Injury Frequency score over the course of just three years.

“Any effective safety program starts at the top of an organization, or else it won’t go anywhere,” said Jeff Whiteman, CEO, Empire Southwest. “Safety is more important than productivity and profit. It is leadership’s job to reinforce that message to their people every day and to continue to learn best practices to keep everybody safe. Blackline Collective allows us to learn from each other, which provides a great opportunity to learn from successes and mistakes and drive our safety protocols forward.”

Empire Southwest jumpstarted its top-down safety transformation in recent years with several initiatives, including the formation of a first responder program as well as safety teams at every level of its organization to ensure safety remains a priority during any endeavor. It also organized and regularly conducts town hall meetings where employees are afforded the opportunity to ask questions or provide leadership with recommendations on safety practices and more.

“Empire Southwest is an organization that embodies the meaning of a multi-generation family-owned business and lives it every day — they care about the health and well-being of their people above all other metrics,” said Sean Stinson, Chief Revenue Officer, Blackline Safety. “The lessons that can be learned from Jeff and his team on how leadership drives safety are invaluable. Every organization, no matter its size or industry, can take something away from Empire’s approach to building a safety culture. It’s exactly what we are trying to accomplish through Blackline Collective.”

About Empire Southwest: Empire Southwest is an authorized Cat® dealer for heavy equipment and power systems throughout Arizona and Southeastern California. In addition, Empire is a provider of commercial SunPower solar products, an authorized AGCO agriculture equipment dealer, and a premiere distributor of Fuso, Maintainer and other leading truck and trailer brands. The third-generation, family owned company was founded in 1950 and has over 2,000 employees across 22 locations. Empire’s affiliate technology companies include SITECH Southwest, Allen Instruments, Take-off Professionals (TOPS), and BuildingPoint West. Learn more about Empire's products, services, partnerships, and careers at www.empirecat.com.

About Blackline Safety: Blackline Safety is a global connected safety leader that helps to ensure every worker gets their job done and returns home safe each day. Blackline provides wearable safety technology, personal and area gas monitoring, cloud-connected software and data analytics to meet demanding safety challenges and increase productivity of organizations in more than 100 countries. Blackline Safety wearables provide a lifeline to tens of thousands of men and women, having reported over 140 billion data-points and initiated over five million emergency responses. Armed with cellular and satellite connectivity, we ensure that help is never too far away. For more information, visit www.BlacklineSafety.com and connect with us on Facebook, Twitter, LinkedIn and Instagram.